Share All sharing options for: Indians To Trade Sabathia? 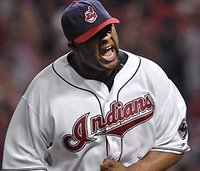 According to Ken Rosenthal, the Indians may consider shopping CC Sabathia if they fall out of contention by the All Star break. Sabathia is going to leave via free agency at the end of the season anyways, so if they can cash in on a hitter and a couple prospects, it would be worth their while. Rosenthal mentions the Dodgers and Yankees at the top of the list for Sabathia, but I wouldn't be surprised to see the Rockies take a look. The Indians have already been linked to the Rockies because of Garrett Atkins and Matt Holliday, and it is possible we could see them make a swap.

Rockies third base prospect Ian Stewart is doing well for the Rockies so far, and that could possible convince the Rockies to trade Atkins. However, with Holliday a free agent after 2009, they might not want to make a long term investment on Sabathia.