Share All sharing options for: Long Term Deal For Dunn? 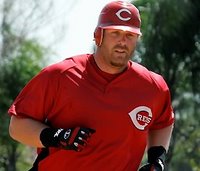 The Reds have been overwhelmed lately by rookie sensation Jay Bruce, who is hitting .591 with 2 HR and 6 RBI in six games this season. But, free agent-to-be Adam Dunn is also hitting well hitting his fifteen homerun today. The Reds have a decision to make with Dunn: Either build a team around him and Jay Bruce, or trade him for a bunch of prospects. Dunn is just twenty-eight and is on pace for another forty homerun season, so it makes sense for the Reds to give him a long term deal. The Reds do not have much depth in their minor league system right now, so there isn't anyone that could replace him right away. The Reds offense is going to look very good next season, but they need to go out and get a pitcher behind Aaron Harang.

Once Griffey hits his 600th homerun, they will likely shop Griffey around. That trade alone should bring in good enough prospects for the future. The Mariners seem like the obvious destination.