Share All sharing options for: Time To Fire Guillen 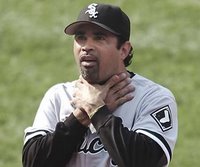 White Sox manager Ozzie Guillen may be a great in-game manager, but away from the field, he is nothing but a distraction. Ozzie recently went off on his team saying changes need to be made, prompting a response from his General Manager: ''Very interesting, very disappointing,'' Williams said. ''It's never a good idea to throw your boss under the bus, especially when that boss has had his back as much as I have. I guess that lineup will be real interesting to see on Tuesday." It is obvious that Guillen is on the outs with players and management. He called for changes on Tuesday, saying that he could be fired, or that his hitting coach could be fired: ''It can be me. It can be [hitting coach] Greg Walker. It can be the players. It could be anybody. I'm sick and tired to watch this thing for a year and a half. I'm not protecting anybody anymore."

The White Sox are currently in first place by one game, when last year they were 7.5 games out of first, so I don't really see where he is coming from. The White Sox are on a three game losing streak and if it continues, I wouldn't be surprised to see him let go. Bench coach Joey Cora has some experience managing and is familiar with the White Sox, so letting Guillen go and naming Cora the manager should make for an easy transition. The White Sox have a great thing going with their veterans working hard and their young players coming through -- it is just too bad their big mouth manager has to cause such a disturbance in the clubhouse.