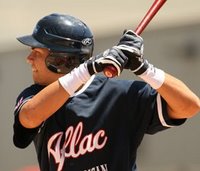 Royals first round draft pick Eric Hosmer was pulled off the field by the commissioners office due to the dispute between the Pirates and first round pick Pedro Alvarez. In no way is Hosmer in trouble, but Hosmer's deal was supposedly submitted after Alvarez's, which agent Scott Boras claims was after the deadline. SI.com's Jon Heyman believes pulling Hosmer off the field is a way to put pressure on Pedro Alvarez to drop the grievance and sign his deal. While this is a very messy situation, an arbitrator is expected to sort it out next week.