Share All sharing options for: Cardinals Moving Carpenter To Bullpen? 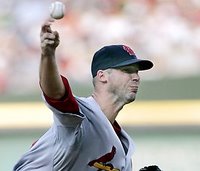 In hopes of getting Chris Carpenter back with the team before the season ends, the Cardinals would like to bring him back as a reliever. "It is important for him to pitch before the season ends. He doesn't care what role that is. He just wants to pitch as much as he can before the season ends so that he's comfortable going into spring training," pitching coach Dave Duncan said. Carpenter looked good in his last bullpen session, but they will wait a day or two more to see how his shoulder feels after a couple days rest. In three games this season, Carpenter is 0-1 with a 1.88 ERA, and has only pitched in four games since 2006.

The Cardinals plan is not bring him back as a closer, but as a long reliever, to get the team into the seventh or eight inning for the set up man and closer. One could say that Carpenter's injury has kept the Cardinals from being a contender in the playoffs, and this is possible. However, the Cardinals have failed to go out and get an ace to help the rotation, so the blame is on them. Yes, Adam Wainwright is a great pitcher, but they should have pursued an experienced ace.