Share All sharing options for: Contract Extension For Dempster? 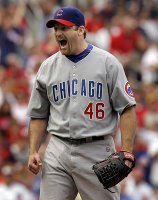 Cubs pitcher Ryan Dempster was not the best closer, but was still making five million dollars annually to do it. Now that he is starting, he has turned into the teams ace compiling a 13-5 record with a 2.92 ERA and 139 K. It is a win-win situation for Ryan Dempster. Not only has he won the hearts of Cubs fans, but he is winning big games in a contract year. Dempster has publically said he loves playing in Chicago and would like to play here are awhile, but the Cubs might not be willing to give him 12-13 million annually.

The Cubs need to evaluate Dempster in September and October to see if his arm will hold up. He did have Tommy John surgery a couple years ago and has been throwing a lot of pitches. If you were to combine Ryan Dempster's innings pitched from 2007 and 2006, it would come up nearly fifteen innings short, and that number is only going to grow. The Cubs will have Carlos Zambrano, Ted Lilly, and Rich Harden in the first three spots, if they had A.J. Burnett or Ryan Dempster in the fourth spot with Samardzija, Marquis, or another option in the fifth spot. That is an excellent rotation and the Cubs have the money to make that happen.