Share All sharing options for: Interview with Cliff Floyd 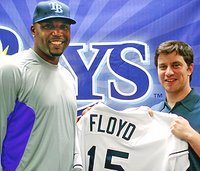 On Thursday, I called the agent of Cliff Floyd to set up an interview. Not two hours later did I get a call from Floyd saying he would love to do an interview. Earlier this morning, I gave him a call and we got it done. Not only that, but we shared ideas about the Sale of the Cubs, and other pressing issues around the game. Floyd recently signed a deal with the Tampa Bay Rays, and seems really excited about the 2008 season. I want to thank him again for doing this interview for me. I also I want to thank his agent, Sam Levinson, for setting this up for me on such short notice, I really appreciate it.

ELI: Your high school stats were very impressive in the final two years. With that said, what was going through your mind as the draft approached?

CLIFF: I thought that if I went in the first round, I'd take another look at it. My mother really wanted me to go to school and further my education so I definitely kept that in mind. I think that was on my mind more than anything, pleasing my mother. But when I was taken in the first round, I decided to sign.

ELI: Do you remember which teams you had talked with, if any?

CLIFF: Yeah I talked to Cleveland, who I think were before the Expos, and the Cubs. I was told the Cubs were a stone possibility, but they thought I might be distracted playing for my hometown. I think they ended up taking Doug Glanville and the Indians took Manny Ramirez.

CLIFF: You hear about trades all the time and when they finally happen, it is like a reality check. You never know how it feels until it happens. You have established a home, friends, family, so it is not as easy as it seems.

ELI: Can you describe your feelings with two outs in the bottom of the eleventh when Edgar Renteria got the base hit to win?

CLIFF: Now that it was so late in the game, we didn't have too many feelings. It was like we were running on empty. You know your stomach doesn't have the butterflies anymore, it was just who is going to get the big hit. There was a huge rush when the bases were loaded, but at that point, we knew we were going to win. It was just who was going to get the hit.

ELI: In 2002, you spent the season with three teams, was it hard to adjust to a new clubhouse and your role with the team?

CLIFF: Yeah definitely. Like I said, it is hard to pick up and move. You establish yourself in one area, then you have to move and you have to do it quickly. You have to find a place for your family and the team that acquired you doesn't want you as a fill in player, they need you to produce. So there is pressure. But once you get settled, it's all good.

ELI: People have said that you were loved by the New York Met fans, can you tell me what makes them different than everybody else?

CLIFF: Yeah they are great fans. They are very dedicated. Not only that, but they understand the game, they have passion, they don't disrespect the stadium. You know at the end of the day, if you can play in New York City, the highest market for sports, you can play anywhere.

ELI: How exciting was it for you to return home and play with the Cubs?

CLIFF: It was beautiful. I got to come home, see my dad. I had more day games so I could see him more because he was sick. And I got to play at Wrigley Field, where so many great players have played. Players like Rick Sutcliffe, Lee Smith, Billy Williams, Ernie Banks. He is Mr. Cub, all Cubs fans know him. Also, they've got the greatest fans in baseball, which was great to be surrounded by all the time.

ELI: You made some pretty good catches up against the wall at Wrigley, did it leave you with any bruises or scratches?

CLIFF: Man I'll tell you, that is not a good place to catch a ball, it is not fun. You have to know the elements, the wind, the sun. The sun in right field might be the worst in baseball. During the day, that might be the toughest position around. And the field conditions were not great last year, but I wouldn't give up playing at Wrigley for nothing.

ELI: Have you had a chance to talk with any of your new teammates? What can we expect from you guys this year?

CLIFF: I haven't yet. You know, unless you sign a long term deal you really don't get a chance to talk with anyone until Spring Training. That is when everything falls into place. You know we are in a tough division, but this is an exciting team. It is going to be fun. Our GM, Andrew Friedman, has done a great job putting this team together. Also, you cannot go to Spring Training feeling any doubt. You have to look forward, come in healthy, and eliminate some of the off the field things.

ELI: Out of all the stadiums you have played at, which is your favorite? Which has the best clubhouse?

CLIFF: My favorite has to be Dodger Stadium. It is a beautiful park, great announcer, the fans are really close. You know, you can't beat Vin Scully when it comes to announcing. As for a clubhouse, probably Arizona. It is nice and wide, clean, good food, good lounge chairs. You know, you give me a clubhouse with good food and I'm fine.

ELI: I bet Arizona is nice after spending a season in the narrow Wrigley Field clubhouse.

CLIFF: To be honest, I think they should renovate Wrigley Field. I know some of the fans might not be for it, but it would definitely help the team.

ELI: Yeah, as a fan, I rather them renovate then change the name. If they rebuilt a stadium and kept some of the things like the name, scoreboard, and ivy, that would be great.

CLIFF: Yeah exactly. But, business is money. Still, anyone that buys the Cubs would never mess with the name.

ELI: If you could face one pitcher from the past, who would it be?

CLIFF: Probably Lee Smith. Just how he went about his business. And he is not in the Hall, but he played the game right, he was soft spoken. That's who I would want to face.