Share All sharing options for: Interview with Curtis Granderson 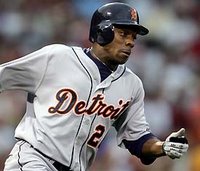 This evening, I had the chance to interview outfielder Curtis Granderson of the Tigers. This season, Granderson accomplished the 20-20-20-20 feat joining Willie Mays, Frank Schulte, and now Jimmy Rollins. In his second major league season as a starter, he has established himself as a true competitor and a threat with his bat and glove. Granderson goes out of his way to connect with fans. He has an ESPN Blog and a Myspace page, and does interviews almost weekly with sites and media outlets. I want to thank John Fuller of Full Athlete Marketing for setting this up for me. We first connected on this back in April and he stood true to his word and got this interview done for me, I really appreciate it.

ELI: Besides baseball, what other sports do you play?

CURTIS: I love to play basketball but I haven't played in awhile. But if I could get back on the court and play I definitely would.

ELI: What veteran player of coach has made the biggest impact on your game since being called up?

ELI: In 2005 you had a crazy week which featured an inside the park homerun, a five hit game, and a walk off homerun. Did you start to get the feeling that you might have established yourself at the major league level?

CURTIS: Not really. My timing wasn't great and I was only there for about fifty days. It was exciting, but I do not think I could call it home yet. I still had a lot of work to do.

ELI: Easter Sunday in Kansas City, you passed out autographed eggs with candy inside. What is your main reason for being so involved with the fans.

CURTIS: I think it is because I was a fan once and I remember going to the games and seeing the players was definitely a high point and now that I have that chance to do the same. I am always out there early and want to get back so it is something I always like to do.

ELI: You were number twenty-eight, what is the significance to that number?

CURTIS: There isn't much significance too it. Ironically, my favorite numbers are two and eight but that isn't how I got twenty-eight. When I was at UIC it was assigned to me and after I got my call up I was originally given 26. During the 2004 off season we acquired Vance Wilson who got Chris Shelton's number who then took my number twenty-six. When I got a call from the clubhouse manager he said he switched my number. I was worried it was going to be seventy-five or something like but when he told me it was twenty-eight, so I was okay with that. I just hope I keep that number from now on.

ELI: Can you think of one pitcher who has given you consistent trouble each time you faced him?

CURTIS: Bobby Jenks, the closer for the White Sox. I tend to face him when the momentum is on his side, when his slider is ranging from 90-99 mph and I just seem to struggle every time. I'm either 0-7 with six strikeouts or 0-8 with seven strikeouts, so it isn't good.

ELI: I know this topic may have split the clubhouse in two, but who was it: Kanye or 50 Cent?

CURTIS: Hands down it was Kanye. People were talking about it on the iPods, iPhone, and other things like that. I heard some great things about 50 Cent and he isn't bad or anything but Kanye really out did himself.

ELI: Do you have a favorite song from the CD?

CURTIS: Yeah, it is the new single-Good Life.

ELI: Who is the funniest guy in the clubhouse?

CURTIS: Vance Wilson is usually making jokes and having a good time, but he was injured and wasn't there much. Magglio [Ordonez] is surprisingly one of the funny guys. He comes in to the clubhouse and within five minutes he just starts laughing and you can hear him, and you know it is him, from across the room. Sometimes I'll just look at him and we'll start laughing.

ELI: Who would you find sleeping in the dugout during the game?

CURTIS: I'd probably be on that list because I love my sleep [laughs]. Sean Casey, depending on what's going on. Me and him will probably be hiding out in the back talking about wrestling and just doze off and when we wake up, it is our turn to bat. Someone who would not be sleeping is Kenny Rogers. He is always up and loud in the dugout.

ELI: Who was your favorite player growing up?

ELI: If you could rob one player of a homerun, who would it be?

CURTIS: I cannot think of one particular player but I would want to do it in a big situation. Former Tiger Nook Logan, who is now with the Nationals, was running back on Bonds' homerun and although it was gone, he tried to jump up and grab it. If I had to opportunity to rob a homerun like that, I think that is something I would want to do and be able to have that ball.

ELI: Growing up in Chicago, were you a Cubs fan or Sox fan?

CURTIS: I was not against the Cubs, but I guess I was more of a Cubs fan. I did really like the Braves though; but who didn't in the mid-nineties with Maddux, Glavine, and all those guys.

ELI: This series with Diamondbacks and Rockies, what do you think about it before it starts?

CURTIS: The Rockies and Diamondbacks are both very exciting teams who are fighting for recognition. They both have had the same amount of time off, so they will be a little rusty, but it should be very exciting.