Share All sharing options for: Interview with Jamie Moyer 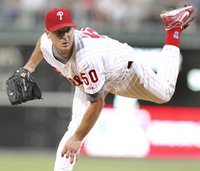 Last July, I put in a call to the Moyer Foundation about a possible interview with Jamie Moyer. The women I talked to, Sandy Murray, told me he would really like to focus on baseball and would get back to me at the end of the season. Come the end of the season, I put in another call and I had my questions sent over to have answered. Moyer is currently pitching on the Phillies, but has been in baseball since 1986. Many think, including me, that he will keep pitching until there is no long a jersey available. I want to thank Jamie Moyer, and especially Sandy Murray for staying to her word, I really appreciate it.

ELI: What was it like being drafted by the Cubs? Did you see it coming?

JAMIE: It was exciting. It was a dream come true to be drafted by a pro team and have the opportunity to play.

ELI: After pitching in the majors for several years, you were sent back to the minors in 1992? What did you work on while you were down there to get back?

JAMIE: Getting my confidence back.

ELI: What was it like getting traded from the Red Sox to the Mariners? How did you find out?

JAMIE: It was an exciting opportunity to be a starting pitcher on a regular basis, doing what I wanted to do, going to an organization where I knew there was a consistent chance to go far, as long as I did well. I found out right before a game- I took off my uniform and just got on a plane.

ELI: Many would say that 1997 was your breakout year with the Mariners. Do you remember working on anything in the off season before that to get better?

JAMIE: Nothing in particular, the same program every season. Consistent work outs and getting rest while trying to get mentally prepared is all.

ELI: What was it like going to Japan in 1998? Were any of the players playing on the Japan team playing in the majors now?

JAMIE: Ichiro and [Hideki] Matsui were there. The opportunity to play on an All Star team was really exciting. Often times I thought about how I wanted to play on a regular season team full of All-Stars.

ELI: The 2001 season was a crazy year for the Mariners. What do you remember most from that year?

JAMIE: Everybody came in with a great work ethic and expected win, and we did. We tied the MLB record with 116 wins.

ELI: The final game in 2007 was a big one, were you feeling any different about that start than other ones?

JAMIE: I knew the significance of what was going on, which made it exciting, starting knowing the Mets were losing. But I tried to focus on pitching well, and fortunately we were able to win, and it gave us a division championship.

ELI: Can you tell me some about the Moyer Foundation? Camp Erin?

JAMIE: The Foundation is an extended home for me with the support of great employees, great volunteers, and the generous support of the community believing in what we do at the Foundation. With all that support, it has been a great way to give back to the community. Camp Erin is our bereavement camps for children- it is a special place for us. I feel privileged and honored to establish more Camp Erin's in the Northwest and beyond. To see many children, who are going through such a difficult time, benefit from Camp Erin is fulfilling. We are so grateful to those who have supported our mission through Camp Erin and we look forward to continuing to help kids for many years to come.

ELI: What would you say is your best pitch?

JAMIE: Any pitch that I can get someone out early on!

ELI: Could you name one hitter you have had constant success against?

JAMIE: It varies. Nobody really stands out. Maybe Scott Brosius.

ELI: Who is the funniest guy in the clubhouse?

ELI: Who on the Phillies is most likely to be found sleeping in the dugout during the game?

JAMIE: Nobody, because I wouldn't let them.

ELI: What is your favorite baseball movie?

ELI: Can you think of a funny mound visit you had with a coach or catcher?

JAMIE: Danny Wilson, during a Yankees game. I had left him a message earlier in the day asking him to be a God father to my son. The message got mixed up at the hotel, and he didn't get back to me immediately. At the game that night, after the first pitch, he walked up to me, handed me the ball, and said, 'Oh, and by the way, yes!'

ELI: If you could pitch to one pitcher in the past, who would it be?