Share All sharing options for: Interview with Kevin Towers 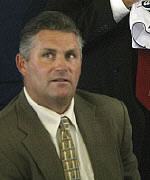 On Friday, I had the opportunity to interview the Padres General Manger Kevin Towers. Despite being in the playoff hunt, he set aside ten minutes to answer my questions and talk a little baseball with me. Kevin Towers joined the Padres in 1982 as a player and after leaving the team for a couple years to join the Pirates, he was back with the Padres as their GM where he is still working today. I want to thank him for giving me ten minutes to do this interview. It was a lot of fun, and I really enjoyed it.

ELI: Where were you previously before joining the Padres?

KEVIN: I was actually a first round pick of the Padres back in 1982. I played several years in their system up until 1988. I played alongside the Alomar brothers winning a Pacific Coast League Championship. In 1989, I was an area scout in the Midwest and a pitching coach during the summer. From 1991 to '93, I worked with the Pirates as a Cross Checker, who is the right hand man to the Scouting Director. The following year I was hired as the scouting director for the Padres-

ELI: Did you scout any guys still playing today?

KEVIN: Yeah, Dustin Hermanson, Troy Glaus, but he didn't sign, Ben Davis, he is a catcher, he started with us as well. Then in 1995, I was hired as the General Manager where I am today.

ELI: Your number one pick in 2004 Matt Bush converted to a pitcher, how is he doing?

KEVIN: Bush got in about ten games before injuring his elbow. He is going to have Tommy John surgery and we hope to have him back by Spring Training in 2009. But, he was touching 98 mph on the gun so we hope he can come back strong and continue throwing the way he was.

ELI: What are your day to day duties as a General Manager during the off season?

ELI: What would you say is the slowest month of the year?

KEVIN: Probably January. By then, most players have signed and it is a time to get set up for Spring Training.

ELI: How about September?
KEVIN: It depends on where you are at. September is when you get to look at young players but when you are in a Pennant Race it is a time to do advanced work on opposition for the post season and begin thinking about the off season for potential free agents.

ELI: Can you tell me a little bit about the Michael Barrett trade, who contacted who?

KEVIN: The Cubs contacted us about Barrett and we wanted a veteran catcher like him because we didn't feel Bard or Bowen were ready to take an everyday role with their lack of experience. It worked out for both teams though. We got the veteran catcher we needed and they got a young defensive one.

ELI: Barrett is set to be a free agent, have you started talking with him at all?

KEVIN: I like to focus on that stuff more in the off season but he will definitely be considered. There are so many veteran catchers on the market that we will determine who would help us the most after the season. Whether it's Ausmus, Kendall, Barrett, Lo Duca, it will determined after the season. We do have some young guys like Nick Hundley or Colt Morton, and will get a better look at them in Spring Training.

ELI: You also acquired Kevin Kouzmanoff at the beginning of this season, was there any doubt in him when we was struggling in April?

KEVIN: Not too much. We needed a third baseman and trading Barfield didn't effect us too much because I believe it is the easiest position to fill. Giles, Belliard, and so many others were available. Also, Kouzmanoff has probably been are most productive player offensively since May.

ELI: Yeah, so you added Giles, what are the Giles brothers like in the clubhouse?

KEVIN: Those two are like an umbilical cord and they have wanted to play together for a long time now. It is rare that they are not fifteen feet from each other, or messing around in the clubhouse. Marcus hasn't been what we hoped at second base and he has an option for next year, so we'll see what happens.

ELI: When do teams start planning for the Trade Deadline?

KEVIN: Usually around early July but I am a very pro-active GM and I'll start probing certain teams in June. We'll start scanning rosters for fits and making calls to teams we think will be interested. If I knew Luis Castillo was available with the Twins, I would have called, but I didn't think he was available.

ELI: You were able to get Ensberg though, that was a solid pickup?

KEVIN: Yeah, we tried to get him in 2006 but the Astros weren't interested so Ensberg knew we were pretty interested all along.

ELI: Being with the Padres for so long you have probably formed some good trading partners, do you have any?

KEVIN: Yeah I suppose. The Rangers and I have worked some good trades over the past couple years. We were able to get Chris Young and Adrian Gonzalez for Adam Eaton and Aki Otsuka. We also acquired Chan Ho Park in exchange for Phil Nevin, so they are probably are most active partner.
ELI: Were you surprised by anything Greg Maddux brought to the Padres?

KEVIN: No, he was pretty much advertised the way he is. His interactions with young players, the way he fields his position, how he uses the bat, everything is just about what we expected.

ELI: You usually don't get pitchers that are 6'10'', do you think he has an advantage over most hitters?

KEVIN: It definitely helps with his deception. He isn't the hardest throwing, but the way he hides the ball makes it look 5 mph faster.
ELI: Do you have a favorite NL Stadium besides PETCO?

KEVIN: Yeah, I love Wrigley Field, but it isn't the most comfortable. I also like San Francisco. Probably my all time favorite though is Pittsburgh. It is a very intimate stadium aside from the playing field and you have a great view of the skyline looking on into the city.

ELI: When trading minor leaguers, do you have any untouchables?

KEVIN: Nobody is untouchable if the right deal presents itself. I have three tiers though: 1st, 2nd, and 3rd. I like to stay away from the 1st, and even the 2nd a little bit if I can but that is how I classify them if I have to.
ELI: Alright, what is your favorite sports movie?

KEVIN: Bang the Drum Slowly. It was made in the 70s.
ELI: Did you have a favorite player growing up?

KEVIN: Yeah, Tom Seaver. He was so good and had lighting stuff, a great fastball.

ELI: Is there anything you hope to address this off season?

KEVIN: Well the outfield is definitely something we want to address. [Mike] Cameron and [Milton] Bradley are set to become free agents so we will look to resign them or look at the market.

ELI: Is there any interest in Kosuke Fukudome?

KEVIN: Absolutely. We tried to sign him a couple years back when he didn't sign with his club out of school. He was originally a short stop so we have had interest in him for awhile. He did have surgery though but he is someone that we may pursue.

ELI: There season is shorter so he got an extra month and half to heal, does it worry you that players from Japan might wear down in September because they are not used to the extra month?

KEVIN: No, not really. Players are more durable than others and the guys that come over have proven they can play so that really isn't an issue.

ELI: How about the language barrier, how do they do in the clubhouse?

KEVIN: Well we had Otsuka and he fit in very nicely. He did have a translator, but he caught on pretty quick.