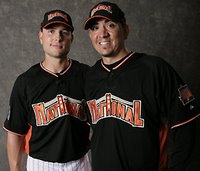 The Nationals have assembled a team that lacks a power hitter to build a lineup around and an ace to work off of in the rotation. They have several young, unproven pitchers in the rotation who could be affected long term by their continued struggles all season. By bringing in a second tier pitcher like Jon Garland to lead this rotation would take a lot of pressure off pitchers Jason Bergmann and Colin Balester. However, GM Jim Bowden said he would not spend free agent money on pitching, but rather on hitting. When I spoke with Bowden he told me that spending money on the free agent market will be a last resort.

Rumors have been flying that the Nationals are preparing to open their wallets on a big name free agent. Jim Bowden spent several years with Adam Dunn in Cincinnati and might target him for the Nationals. However, that would be a long term investment to a .247 hitter, something the Nationals shouldn't do. It would be much smarter to target Matt Holliday of the Rockies, who is under contract until 2009 and would give them the power hitter they need. Yes he would cost them nearly 100 million, but he would give them a power hitter and leverage in negotiations with other players. This might not be Jim Bowden's decision this off season, but the Nationals would be smart to make a big time move to help this team in the future.