Share All sharing options for: Nationals Set To Fire Bowden? 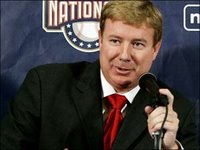 According to the Rocky Mountain News, the Nationals are on the verge of firing GM Jim Bowden and replacing him with Vice President Mike Rizzo. One major reason for this move could be because Bowden is being investigated by the FBI; however, Bowden has done little for the team through his scouting and the team is tired of waiting for players to come through. The best way to build a team that does not spend money is to make trades and to develop those players. Signing older players like Ronnie Belliard or Cristian Guzman and hoping they can turn their struggling careers around does work sometimes, but the Nationals should be working their young players rather than banking on Dmitri Young year after year. Jim Bowden definitely has a career in baseball, but it looks like his future is in scouting and not as a General Manager. Other possible replacements for Bowden include White Sox assistant Rick Hahn, Diamondbacks player development director A.J. Hinch, or assistant Ken Forsch of the Angels.