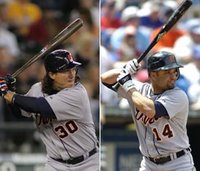 The Tigers, who have arguably disappointed everyone in baseball, are looking to open up some payroll by trading Magglio Ordonez and Placido Polanco. Both players have a couple good years left and haven't shown any signs of slowing down. Polanco is hitting .316 with 7 HR while Ordonez is hitting .311 with 15 HR. Both players would land two or three prospects for the Tigers while clearing some cash. With that cash, GM Dave Dombrowski plans to be very aggressive on the market, potentially going after CC Sabathia.

However, I have heard the the Tigers are more interested in going after Francisco Rodriguez and signing a second tier pitcher like Ryan Dempster or Jon Garland. While that would help, they would be smart to go out and sign an ace like Ben Sheets, as well a pitcher like Jon Garland. There pitching is very weak, and they need all the help they can get to compete with the White Sox and Twins.