With Carpenter Out, Cardinals Need An Ace

Share All sharing options for: With Carpenter Out, Cardinals Need An Ace 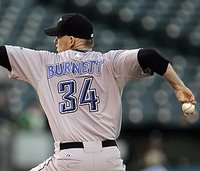 Chris Carpenter's repeated injuries should signal the end of his season, so he does not damage his arm any more. While the Cardinals have a surprisingly good team this year, adding an ace to the rotation would put them back in playoff consideration. While Chris Carpenter still has potential to come back, I fear that he may have been rushed back in the injuries could keep returning. However, Todd Wellemeyer has emerged as a solid number three starter while Kyle Lohse has turned out to be a great bargain. If they added an ace like CC Sabathia or Ben Sheets to the front of their rotation, they would be in great shape for 2009. Even if they added a second tier pitcher like Jon Garland, or perhaps Oliver Perez, it would make that rotation one of the best in the division.

Besides pitching, they do not have too many upgrades to make. They could go after a corner outfielder, but Schumaker and Ludwick are doing just fine. They would be smart to pursue a second baseman to fill Adam Kennedy's spot, because he has not held his own out there. Adding Mark Ellis to the fold would give them a solid veteran with good second half numbers. Assuming pitching coach Dave Duncan returns, the Cardinals will need just a few upgrades to put them back in the World Series fold again.