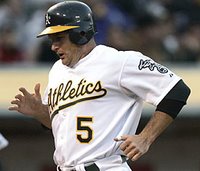 The A's released clubhouse favorite Mike Sweeney today to make room for more rookies on the roster, a move that came as a surprise to many: "Mike's had a great career, and hopefully he'll catch on with someone else," A's manager Bob Geren said. "It's just at that point in the season where we're giving some more young guys a chance to show what they can do."In 42 games this season, Sweeney hit .286 with 2 HR, but was better known for working with the rookies on their hitting and adjustment to playing at the highest level.

"I can look myself in the mirror knowing that I played 100 percent, 100 percent of the time."