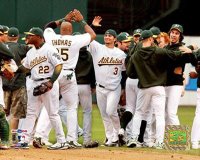 Athletics owner Lew Wolff hinted yesterday that if they cannot get the stadium situation resolved in Fremont, that he would have no choice but to leave the state to play elsewhere. "We're trying to figure out if we can," he said, when asked about getting a BART extension for the proposed Fremont ballpark. "If we can, we will. If we can't, we won't. Of course, then, we wouldn't be in California any more, either." With that said, where would the Athletics move if they cannot get the Fremont situation solved? MLB would probably encourage the Athletics to stay in the West, instead of realigning the divisions. Here are a couple possible destinations for the Athletics if they were to move:
Las Vegas, Nevada: People have been talking about having a baseball team in Las Vegas for a long time, and this could finally be their chance. The Las Vegas 51s, the Triple-A affiliate of the Dodgers, has been a big draw in Vegas despite their old stadium. If they were to add a professional team to the city, seating thirty to forty thousand, they would probably do very well. Not to mention them staying in the AL West. How does the Las Vegas Lights sound?
Tucson, Arizona: Arizona is the home of a dozen of major league Spring Training facilities, and it is possible they would add a second Major League team. Tucson has a little over 500,000 people, and there is definitely room for a Major League stadium. The population in Arizona continues to rise, and it could become even more popular with the addition of a major league club. It is the second largest city in the state, and is the site of the University of Arizona, making it a desirable location. How does the Tucson Ringtails sound?
Portland, Oregon: Portland has been talked about a lot as a possible destination for a Major League club. They want a team and certainly have the population to support a big league club. They support a minor league baseball team, as well as a NBA team, so they could take on a MLB team seating 25-35 thousand people. How does the Portland Thunder sound?
Realistically, the move would not happen for another eight to ten years, but a decision could be made in the next two or three. The Winter Meetings are happening in the Las Vegas this year, so there should be a lot of talk about it come December.