Share All sharing options for: Bedard to Red Sox, Cubs, or Blue Jays? 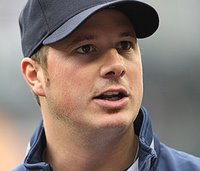 The Mariners are reportedly very frustrated with Erik Bedard and are considering whether or not to tender him a contract this offseason. The Mariners are obviously in rebuilding mode and may not want to deal with Bedard, who will be out till August of 2009. In fifteen games this season, Bedard was 6-4 with a 3.67 ERA in fifteen games, on pace for another 12 to 13 win season. His high strikeout rate and consistency is what will earn him a good contract, but the Mariners may not want to risk that with a pitcher just coming off of surgery.
With that said, if they were to not tender him a contract, expect the Red Sox, Cubs, and Blue Jays to be in on him. The Red Sox are known for taking on pitchers who are interested and working with them to get them healthy. Three good examples include Wade Miller, Matt Clement, and Bartolo Colon. The Cubs were very aggressive in their pursuit of Erik Bedard this past offseason as well as three seasons ago in the trade for Sammy Sosa. Not to mention their willingness to work with rehabilitating pitchers. Look what success they have had with Ryan Dempster. The Blue Jays may be interested in bringing back a Canadian, but also because he is familiar with the AL East.
This story was approved by MLB Rumors.