Share All sharing options for: The CC Sabathia Effect 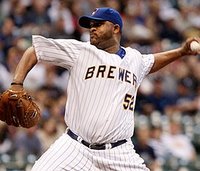 It's official. Brewers pitcher CC Sabathia will win the Cy Young Award and will likely be given a record breaking salary following the postseason. While this is great news for Sabathia and every pitcher on the market, every team in the hunt for a pitcher will suffer. Sabathia appears to be heading towards the Dodgers or to one of the New York teams, so the Brewers will have a hard time signing him. If the Brewers can put together a good postseason run, maybe they have a chance to resign him. Anything less than a World Series victory will likely mean Sabathia is heading elsewhere.
If Sabathia signs a deal that earns him 20-22 million dollars annually, that means that pitchers like A.J. Burnett, Derek Lowe, Ryan Dempster, Mike Mussina, and even Jamie Moyer are looking at big raises. At first, Burnett was looking at making fifteen million dollars annually. However, now that Sabathia has proved that he can pitch in the clutch (and three times in nine days), he will likely bring up every pitchers annual salary. Expect the second tier pitchers like Burnett, Lowe, and Dempster all looking at at least sixteen to eighteen million dollars annually.
Derek Lowe has proven that he can pitch going 14-11 with a 3.24 ERA in thirty-four games this season. His postseason success and veteran know-how makes him a very desirable pitcher this offseason. The Tigers will likely look at Lowe as a priority, while teams like the Yankees, Mets, and Red Sox will look to him if they miss out on their first target. One team to look out for in this race is the Blue Jays, who could look to Lowe to follow behind Halladay, making for an excellent rotation.
If the Cubs get knocked out in the first round of the playoffs, the Cubs might have a little trouble resigning Ryan Dempster. Dempster is expected to get a four year deal worth about 55-60 million dollars, but that could go up based on signing from players like C.C. Sabathia and A.J. Burnett. The Braves, Astros, and Red Sox are all possibilities for Dempster if he doesn't resign with the Cubs. However, Ryan Dempster has expressed his desire to stay in Chicago with the Cubs.
Signing any pitcher is a risk, especially one like Sabathia who is overweight, overworked, and not as much motivation after cashing in. A team like the Yankees might be smart to target A.J Burnett first.
This story was approved by MLB Rumors.