Cubs Should Go With Gaudin

Share All sharing options for: Cubs Should Go With Gaudin 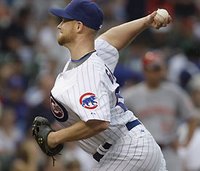 Although Cubs pitcher Chad Gaudin has struggled lately, he is the pitcher the Cubs should give their final roster spot to in the postseason. Right now, it is down to Gaudin and Samardzija. While Samardzija is 1-0 with a 2.08 ERA, he has pitched in a 139.1 innings this season (including his stints in the minors). If the Cubs view him as a long term reliever, or potential starter, they would be smart to rest him and go with the experienced Gaudin in the postseason. Not only is Gaudin very valuable in the spot starter role, but leaving him off the roster risks losing him next season because he is upset about not making the roster.
Gaudin has struggled since coming over from the Athletics, compiling a 5.84 ERA, but has playoff experience and is a great pitcher to get the Cubs into the later innings through relief.
This story was approved by MLB Rumors.