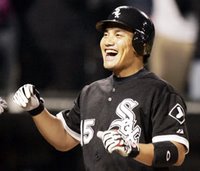 With Jeff Kent out for the Dodgers, they have been forced to go with Blake DeWitt, who is hitting .267 with 7 HR in 95 games this season. While that isn't necessarily bad, the Dodgers would prefer to have a veteran who is familiar with the pitching in the league. Although Tadahito Iguchi struggled, one can attribute that to low morale in the Padres clubhouse as well as playing in a pitcher-friendly stadium.

In the month of September, Iguchi is a career .278 hitter with 5 HR in 63 games. He has not played much in Dodger stadium, but is very familiar with the NL West and would likely contribute, at least from a scouting perspective, when playing. The Dodgers have six games remaining against the Padres, and eighteen of their remaining twenty-two games left against the NL West. A different perspective at the scouting meeting could make all the difference in getting them into the playoffs.