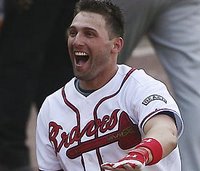 According to Joe Posanski, the Royals and Braves could match up in a trade for Jeff Francoeur. Although Francoeur has struggled in Atlanta, Royals GM Dayton Moore believes he still has some potential to turn it around. Moore was with the Braves when they drafted Francoeur and is still a close friend of his, so a trade is plausible. Francoeur is hitting .239 with 11 HR and 68 RBI in 149 games, thirty points lower than his career average. Scouts believe the big increase in weight altered his swing, forcing him to over swing and pop up too much. While he plans to work with a hitting coach and lose weight, he could try working the ball the other way.
As for other teams that could pursue Francoeur, the Indians are possible destination. The Braves plan to be very busy this offseason upgrading on the market, as well as deciding whether or not to bring back Smoltz and Glavine. Francoeur looks more like a trade deadline possibility.