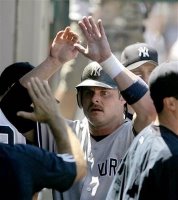 Several days ago, ex-Jay and current Jays broadcaster Rance Mulliniks said that Jason Giambi might be willing to sign with the Jays as the permanent DH and speculated that it might cost the Jays around 12-15 million dollars a season over a course of a 2-4 year contract. Giambi, who will be 38 by next season, is hitting .251 with 30 Home Runs and 92 RBI's. A signing like this would likely prove costly considering Giambi's age and declining production(his OBP has gone from a .440 in 2003 to a .377 in 2008 and his average has hit .270 once in the last 6 seasons). A cheaper option for the Jays may be to re-sign current back up outfielder Brad Wilkerson or re-sign current pinch hitter/spot starter Kevin Mench to an incentive laden deal with a base salary of around 750K. Both Mench and Wilkerson have shown they have Home Run pop in the past(Wilkerson has hit 20+ Homers 3 times in his career while Mench has done it twice before) but neither has been able to make quality or consistent contact over the last few seasons. Another cheap option would be to sign current Free Agent Richie Sexson to a 1 year incentive laden deal and have Jays hitting coach Gene Tenace work with him on his swing. One other option would be to use a rotating tendem between Left Field and DH using Adam Lind and Travis Snider.

Posted by Will M.