Share All sharing options for: Hardy to White Sox? 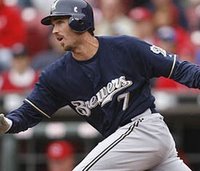 According to a source, the Brewers will try to trade J.J. Hardy this offseason in order to make room for shortstop prospect Alcides Escobar. Hardy is the top shortstop in the National League, and he would only hurt his value by moving to third base, so moving him appears to be the only option. The Brewers gave Ryan Braun time to develop in the minors before calling him up in 2007, and they would be smart to do that again with Escobar. So many teams have tried to start their prospects from the start, and they have failed to find their swing (Felix Pie, Alex Gordon). While trading Hardy would likely bring back a solid prospect, they would be smart to hold on to Hardy to make sure that Escobar is the real deal. Any player can look like a stud in the minors, but it is important to make sure he is mentally strong to handle playing in the MLB everyday.
Despite my take on the subject, the White Sox make for a good option for Hardy. They will likely let Cabrera and Uribe walk, opening a spot in the infield. If they were to trade a pair of prospects, they would have one of the best middle infield tandems in baseball. Other teams that could go after Hardy include the Tigers, Orioles, Padres, and Royals, among others.