Houston Gets Pounded, Series Being Moved?

Share All sharing options for: Houston Gets Pounded, Series Being Moved? 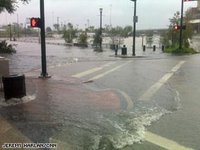 The Houston area is getting pounded by Hurricane Ike, with heavy rain and intense winds making it virtually impossible to play. While the Cubs have offered to split the gate with the Astros and move the series to Wrigley, the Chicagoland area is getting hit with record rain fall and it is not showing any signs of slowing down. While St. Louis is open and relatively close to both Houston and Chicago, it is also getting hit by rain.

With Houston all but evacuated, it does not seem likely that the Astros will be able to get all their employees to the stadium by tomorrow for a double-header. The NL Central race is very close, and MLB cannot afford to put off three games till the end of the season. Not to mention throwing off two teams pitching schedules by four days. If it doesn't let up, MLB could force the Astros to move the series to Milwaukee to play under their dome. This would allow them to have a double-header on Sunday and play a game on Monday, before Milwaukee gets back.