Ichiro To Be Traded?

Share All sharing options for: Ichiro To Be Traded? 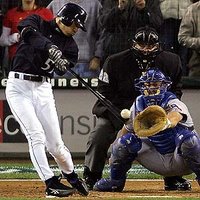 According to the Seattle Times, several Mariners players think Ichiro is more about playing for hit records than he is for the team. This has lead to a fight nearly breaking out in the clubhouse and knocking out Ichiro. This has left the Mariners clubhouse in disarray and could lead to the team trading Ichiro to move on with the rebuilding and clearing the tension in the clubhouse. Ichiro would draw interest from several teams and the Mariners would likely land some solid prospects as well as clear up some payroll. They could put that money towards the free agent market or towards drafting better players, something that would really help their rebuilding.
The Mariners have never been against trading Ichiro, having nearly trading him twice since 2005. It is very possible that the Mariners would trade Ichiro while his value his high and cash in the prospects.
This story was approved by MLB Rumors.