Share All sharing options for: Indians Looking For Closer? 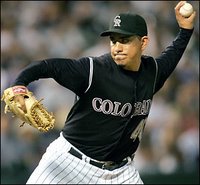 The Indians primary goal this offseason will be to find a top of the line closer. While some have said they would be interested in Angels closer Francisco Rodriguez, he is probably out of their price range. The Indians would be better off going after someone like Brian Fuentes or Brandon Lyon. Both are solid closers with experience who would really bring up that bullpen. According to a source, the Indians will look to Orlando Hudson or Mark Ellis as options next season. However, it is possible they could look to make a trade for Robinson Cano, or a less player like Mike Fontenot.
Indians GM Mark Shapiro has put together a strong minor league system, but he needs to make some big moves this off season or else his job may be in question.