Share All sharing options for: Interview with Brandon Webb 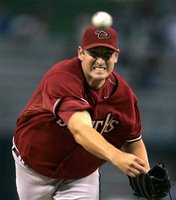 Last year, I sent an email over to the agents of Brandon Webb hoping to do an interview with him. The end of the season and some of his offseason plans got in the way of an interview, but his agents assured me we would get something done. The season got underway and Webb got off to a fast start, winning his nine games and putting the Diamondbacks out to a comfortable lead. While I was happy to hear that Webb was doing well, I knew it would only push my interview back because outlets like ESPN and local Arizona networks would want to talk to him first. Nevertheless, his agents said I would get him soon. Thanks to everyone over at MSM Sports for getting this done for. I particularly want to thank Brandon Webb for doing this, I really appreciate it.
ELI: What was it like to come up knowing you could be replacing Randy Johnson or Curt Schilling in the rotation?
BRANDON: You know, I never really thought I would be replacing them when I came up. It was a process for a couple years before they left and I moved into their role. They really helped me prepare for it well.
ELI: You struggled in 2004. What did you do in the offseason to prepare for the 2005 season?
BRANDON: I just needed to mentally prepare better. I needed to throw more strikes and be more aggressive in the strike zone. I was trying to strike people out before and that's really not my game.
ELI: In 2006, you pitched in the All-Star game. What was your first experience like?
BRANDON: It was unbelievable, very exciting! I loved everything about it, and still do. Striking out [Derek] Jeter in that game was an unbelievable experience. It was great.
ELI: You went on to win the Cy Young Award as well. Aside from the Diamondbacks putting together a good season, what did it mean to you to win the award personally?
BRANDON: To be recognized as the top pitcher in the league was a great honor. Being able to tie my name to so many of the greatest pitchers ever is very special to me.
ELI: When you first begin throwing in the off season, what is the first thing you work on first?
BRANDON: First thing is my arm strength. You have to get it back to feeling comfortable again. I use the tubing and lift weights.
ELI: In your opinion, who is the most exciting player to watch on the team? Why?
BRANDON: I'd have to say [Justin] Upton. He has all the tools, and he's only going to get better. He's a great kid.
ELI: Do you have a favorite stadium to pitch at on the road?
BRANDON: Ha! [Laughs] San Diego. It's a great pitchers' park, a beautiful city and a great city.
ELI: What was it like to pitch in the playoffs last season? Did you feel any different than a regular normal season game?
BRANDON: It was awesome. I definitely felt a little different than a normal regular season game, especially because it was my first playoffs. The excitement in Arizona made it really great. All the fans were really electric.
ELI: When you are not pitching, is there anything you enjoy doing during the game?
BRANDON: [Laughs] Well, I probably shouldn't tell you this, but I like going into the clubhouse and getting a massage on nights I'm not pitching. It really helps me relax the arm and shoulder muscles between starts.
ELI: If you could pitch to one batter, from the past or the present, who would it be?
BRANDON: Does it have to be someone living? I'd love to pitch to Babe Ruth, just to see if I could strike him out. [Laughs]