Share All sharing options for: Is B.J. Ryan Expendable? 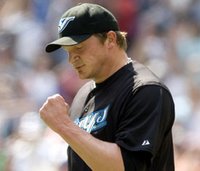 Thus far in the 2008 MLB season, the Toronto Blue Jays have enjoyed having statistically the best bullpen in the American League and one of the best in baseball. One of the biggest surprises this season has been 27 year old rookie LHP Jesse Carlson, who has been the Jays most reliable reliever this season(6-1 record, 1.82 ERA, 52 K's, 22 BB's, 2 Saves, .195 Opponents Avg., 1.05 WHIP). He has a very deceptive delivery and can get righties out just as easily as lefties. He often K's righties with a good, hard sweeping curve that gets in on their hands. This gives the Jays 3 solid left-handed relievers in Carlson, Scott Downs and closer BJ Ryan. With Carlson's unexpected emergence, does this mean the Jays could potentially trade Ryan to fill in a gap in another position? It's hard to say because Carlson is just a rookie but he possesses a closer's mentality, strong composure, extreme confidence, above average repetoire, etc. And Ryan is currently in Year 3 of his 5 year, 47 million dollar deal. In his first year as a Jay, Ryan was nearly unhittable through most of the season but he was over-worked by then Jays manager John Gibbons, who would often have Ryan come in to get a 4 or 5 out Save. His 2nd year was wiped-out due to Tommy John Surgery and so far in his 3rd year, Ryan's been good but not great, which is to expected has he's a year and 4 months removed from having his Tommy John Surgery. The Jays could potentially trade Ryan to a team in need of a closer for a Shortstop plus Prospects. With Francisco Rodriguez being the most sought after Free Agent reliever, the Jays could dangle Ryan and see what offers come out of it.

Posted by Will M.