Is Kerry Wood Worth Bringing Back?

Share All sharing options for: Is Kerry Wood Worth Bringing Back? 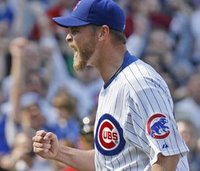 Set aside the emotional attachment. Should the Cubs re-sign Kerry Wood? He has put together a pretty good season, considering it is his first healthy one, making $4.2 million plus incentives. His price tag is definitely set to rise considering Francisco Rodriguez and Brian Fuentes will be getting big increases wherever they sign. There is no guarantee Wood will stay healthy and the Cubs have Samardzija and Marmol to close out games, not to mention Angel Guzman, who has shown to be very effective out of the bullpen. Wood has been with the Cubs for over decade and the Cubs have been very reasonable with him. Wood told the Cubs to give him a fair deal last off-season and may do the same this time around. It will be a difficult decision and his deal will hinge on the contracts other pitchers are able to procure.

While the Cubs are losing both Howry and Wood, there are free agents available that are healthy and affective. Chicago could easily sign former-Cub Juan Cruz and for use in late-inning relief. The Cubs still have to re-sign Ryan Dempster and deliberate over the idea of trading Jason Marquis. However, Marquis has enjoyed an excellent second half and is entering a contract year, so keeping him makes sense. They have an opening in center field which will likely go to either Reed Johnson or Felix Pie. It is also likely the Cubs will offer an extension to Mark DeRosa and very possible they will seek to acquire a right fielder to platoon with Kosuke Fukudome. Personally, I think it would be wise to give Mike Fontenot more playing time at second base while playing DeRosa in right.

The Cubs probably won't make any big moves this off-season aside from minor depth building to prepare for another run in 2009. I would suggest the Cubs sign a Type-B pitcher for the end of the rotation, mostly as insurance. They could take a chance on Carl Pavano or Kris Benson and hope they come through or they could take a chance on a veteran like Paul Byrd. The addition of depth to the starting rotation could prove fortuitous considering three of their starters are very hard throwers and face greater susceptibility to injury.