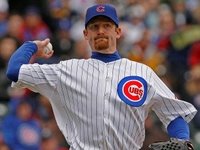 The Toronto Blue Jays need a starting pitcher regardless of what AJ Burnett does. They have a solid top three in Roy Halladay, Dustin McGowan and Shaun Marcum but they need a number four and number five starter that are better then what Jesse Litsch can offer. Plus, with McGowan having shoulder surgery to repair a torn labrum, they need a guy who can help the Jays as they ease McGowan back into form without further injuring his arm by hurrying him back. Of course the biggest free agent's to be are CC Sabathia, Ben Sheets and AJ Burnett but the Jays shouldn't waste their time on a pipe dream like that. But what the Jays need to do is go after someone who will surely be over-looked at first like Ryan Dempster, who also happens to be Canadian. However, Dempster has already expressed his desire to resign with the Cubs.

The Jays could also go after a guy like Jon Garland, Oliver Perez or Odalis Perez. Oliver Perez would be the smartest choice if the Jays can't land Demptster. Perez is just 27 years old and needs a team that will be patient with him and give him proper guidance instead of throwing him to the wolves like the Pirates and Mets have done. Brad Arnsberg, the Jays pitching coach, has already molded Dustin McGowan into a solid pitcher and Perez and McGowan are very similar pitchers. Both have power arms, both rely on strikeouts and both rely on steady offenses to give them run support. Perez still has plenty of potential as he did have a good year back in 2004, going 12-10 with 239 K's and a 2.98 ERA. He has also been good over the last 2 years going a combined 25-17 with 168 Walks, 325 Strikeouts and a 3.70 ERA over 345.0 Innings Pitched. Adding both Dempster and Perez would be ideal and would shape the Jays up to have the best rotation in the American League, if not the entire MLB. But, realistically, the Jays will only add one or the other and settle with a Litsch vs Purcey battle for the 5th rotation spot.

Posted by Will M., Contributing Writer
If you would like to reach Will, email him at mlbrumors@gmail.com, ATTN: WILL.