Jays Planning For Quiet Off Season?

Share All sharing options for: Jays Planning For Quiet Off Season? 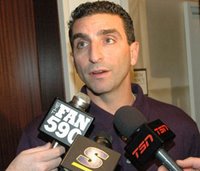 Blue Jays GM J.P. Ricciardi is planning for a quiet off season, filled with internal rebuilding and future development. However, he is going to have to compete with the free spending Yankees and Red Sox, as well as the Tampa Bay Rays, who may get some extra spending after their successful season. While the Blue Jays have Roy Halladay and Dustin McGowan in the 1-2 for 2009 (assuming A.J. Burnett leaves), the 3-4-5 spots are up in the air. Litsch, Purcey, and Marcum have done a decent job for the Jays, but they would be smart to go out and acquire a solid pitcher.

As of right now, here is what the lineup looks like for 2009:

Mark Ellis or Orlando Hudson would make a lot of sense for the Jays. Hudson, a former Jay, is hitting very well and may want to return to his former team. As for Ellis, he may want to stay in the American League, making the Jays a possible destination. 2006 first round draft pick J.P. Arenciba is doing very well in Double-A and could come up in 2009 to take over everyday in the catcher spot. Pitching will help them in the division hunt, so it would be smart to go after a pitcher, perhaps Ben Sheets, or a second tier pitcher like Braden Looper.

If the Jays want to compete in 2009, they better be big spenders on the market. However, it would make more sense to prepare for the long term future, as the Yankees and Red Sox are aging teams.