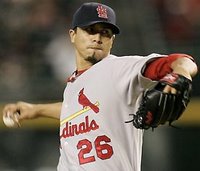 Cardinals pitcher Kyle Lohse finally got the deal he thought he deserved last season. After failing to find a multiyear deal last offseason, Lohse proved to everyone that he was worth the 10-12 million dollars by going 15-6 with a 3.78 ERA in 33 games this season. The Cardinals awarded Lohse today by signing him to a four year deal worth 41 million dollars. It is a risky deal, considering Lohse set a career high in wins and a career low in ERA, but he is entering his prime and could have two or three good seasons that makes the contract worth the Cardinals while.
If Wellemeyer can play like this next year, along with Wainwright and Lohse, the Cardinals could let Braden Looper walk and take a chance on a number three or four pitcher from the market. They are capable of competing in the division, they just need a legitimate closer and solid set up man to keep those close games out of reach.
This story was approved by MLB Rumors.