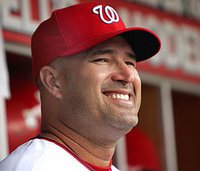 The Washington Nationals fired five coaches Sunday in an attempt to give Manny Acta another chance with a new coaching staff. They fired everyone except Randy St. Claire, the pitching coach who has been with the franchise since 2003. "I feel bad about losing every one of them," Acta said. "Those guys handled it a lot better than I did. They tried to pump me up. They are true professionals." Bowden plans to be very aggressive in rebuilding this club, and that starts with adding a veteran pitcher, as well as a power hitter to build a lineup around. The team is expected to pursue a veteran like Paul Byrd, as well as a hitter like Adam Dunn.
As for new coaches, one name that comes up is Iowa Cubs manager Pat Listach. Listach has done an excellent job managing the Iowa Cubs and could be a base coach for the Cubs if one of the coaches decides to leave. If the Nationals call, Listach would mostly likely bite on the offer, knowing that a managerial job is in sight.
This story was approved by MLB Rumors.