Share All sharing options for: Renteria to San Diego? 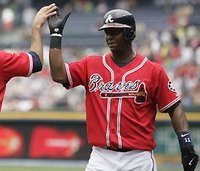 Edgar Renteria has an eleven million dollar club option with a three million dollar buyout for 2009. However, because the Red Sox traded him, they are responsible for the three million dollars assuming the Tigers opt to release him. At this point, that seems likely. Renteria is hitting .266 with 9 HR in 122 games, .24 points lower than his career average. A change of scenery will probably do Renteria well, considering the low morale in Detroit this year. Detroit has prospect Danny Worth, who should be ready to play in the majors by the end of 2009.

With that said, the Padres make for a good suitor for Renteria. His price will be fairly low, and the Padres are in need of a shortstop. While they could keep Khalil Greene in reserve at shortstop and second base, they could also trade him for a prospect for the future. The Giants are also a possibility, who have an option on Omar Vizquel.