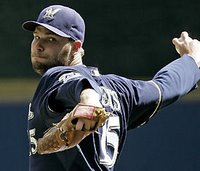 The Brewers are going to have trouble retaining both CC Sabathia and Ben Sheets, both of whom become free agents after this season. It is obvious that the Brewers will try to retain CC Sabathia first, meaning Ben Sheets will be there for the taking. Sheets, a Louisiana native, is 12-7 with a 2.97 ERA in 27 games this season. Moving closer to home could appeal to Sheets, who has a career record of 4-3 in ten career games at Minute Maid Park, would fit nicely behind Roy Oswalt. Adding Ben Sheets to the rotation in between Oswalt and Rodriguez could put them back in contention, especially if Lee and Tejada can come back strong in 2009.

Sheets will be expensive, but nothing more than the Astros can handle. GM Ed Wade has proven that he is willing to take risks, and if given the go ahead, he would be able to land Sheets with ease.