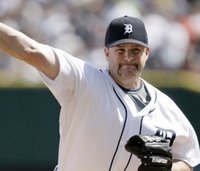 Tigers reliever Todd Jones has announced his retirement. Jones was 4-1 with a 4.97 ERA with 18 SV this season before he finally decided to call it quits: "So this is it. If you're a Tigers fan, I'll never stress you out again. If you're not a Tigers fan, you'll never have me as your ace in the hole, convinced I'll blow a lead against your team." What a way to go out for some who has 319 career saves. Not only does Jones lead the Tigers in career saves, but he was a clutch postseason pitcher with All-Star experience.
Maybe he was trying to send a message to fans and reporters. Nonetheless, Jones should be remembers as a dominating pitcher who many feared around the league.
This story was approved by MLB Rumors.