Wagner Out For All Of '09, Mets Need A Closer

Share All sharing options for: Wagner Out For All Of '09, Mets Need A Closer 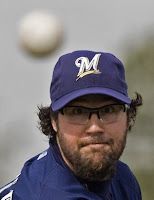 With closer Bill Wagner out for all of 2009, the Mets will need to a sign a legitimate closer. We have all seen what has happened to the Mets without a closer, despite posting a 17-5 record with him down. While it doesn't look like the Mets will make any big moves this off season, they will need to resign Carlos Delgado, as well as find a pitching. That will probably start with a closer, depsite having two impending free agent starters. The two closers that make the most sense are Brian Fuentes and Eric Gagne.

Gagne has struggled this season after signing a ten million dollar deal, but he would probably be willing to sign a one year deal again. That would give the Mets a stopper for Wagner as well as the possibility of having two solid late inning relievers in 2010. The Mets have purusued Fuentes already, and may target him first before going after Gagne. Nonetheless, the Mets will sign a closer this offseason.