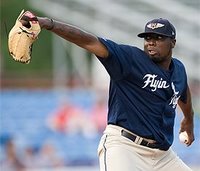 According to Jon Paul Morosi, the Tigers will look to trade one of their pitchers this offseason and will eye a shortstop in return. He points out that the Red Sox want to unload Julio Lugo to make room for Jed Lowrie, a new fan favorite and potential long term replacement at shortstop. If the Red Sox were to trade Lugo for Willis, both of whom are locked up through 2010, they would likely split the four million dollar discrepancy between the contracts, making this deal even more plausible.
The Tigers would be smart to look to trade Nate Robertson, a lefty who would be desirable to a National League team like the Astros. Dombrowski isn't close to losing his job, but he needs to find a way to make this team gel.