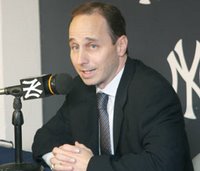 The Yankees and Brian Cashman have agreed to a three year extension through 2011. "I've got a job to finish here," Cashman said in a statement. "That's the bottom line." The Yankees missed the playoffs for the first time since 1993, but saw great strides from some of their younger players. Cashman was criticized for not making a move for Johan Santana, which was made worse when Kennedy and Hughes combined to go 0-8. However, both Kennedy and Hughes are young and need to work through the growing pains of a major league pitcher.
Cashman is one of the best GM's in baseball and the Yankees should be looking like a playoff team again next season.
This story was approved by MLB Rumors.