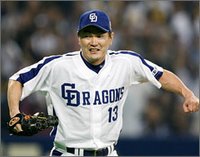 In an attempt to restock their pitching, the Yankees have sent a scout to evaluate several Japanese pitchers in hopes of signing one for their MLB roster. While they haven't had success with Kei Igawa, one source told me they consider a learning experience and will ease any future Japanese players into an MLB role.

According to the New York Daily News, the Yankees are scouting Koji Uehara, Kenshin Kawakami, and lefty Hitoki Iwase. Iwase probably has the best chance to be signed because he is a lefty, and Japanese lefties have had success here.