Share All sharing options for: Yankees to Pursue McLouth 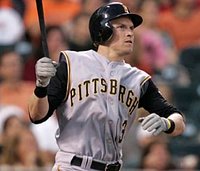 According to Jon Heyman, the Yankees will pursue Pirates center fielder Nate McLouth. McLouth hit very well this season and would likely net the Pirates two or three good prospects in a trade. McLouth hit .276 AVG with 26 HR, 94 RBI, and 23 SB in 152 games this season. Trading McLouth would give the Pirates several good prospects for the future. They could easily land a solid pitching prospect to add to the rotation of struggling young pitchers. If the Pirates were looking to make a serious splash, they could trade both Ryan Doumit and Nate McLouth to the Yankees and land three or four solid prospects to rebuild around. While Neal Huntington is unlikely to trade both McLouth and Doumit, he will likely entertain offers for both to have as many prospects as possible for the future.