Yankees Want Cashman Back, But....

Share All sharing options for: Yankees Want Cashman Back, But.... 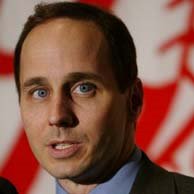 According to Newsday, the Yankees hope GM Brian Cashman will stay with the team following this season. The Steinbrenner boys and Cashman have talked several times over the course of the season, but have to yet to throw out any numbers: "We did talk in Tampa. We didn't talk about dollars, but we talked about time frame, length [of contract]." It is obvious there is some mutual interest in coming back, but the Steinbrenner's have hinted at forming a committee in their front office, something Brian Cashman would probably be opposed to. The Phillies, Mariners, and possible Dodgers and Cubs jobs will be available this off season, and Cashman may want to consider going to a team where the owner isn't hovering.
A deal will need to happen quick because the Yankees would like to go to work as soon as the season ends, so they will probably attempt to get a deal done before the World Series, or immediately following.
This story was approved by MLB Rumors.