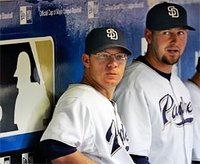 The slowing economy is going to slow the selling of both the Cubs and Padres. Padres owner John Moores is looking to sell up to 49 % of the team as part of his divorce settlement. However, mix the slowing economy with a 99-loss season and a 13 % drop in attendance, and you have a pretty poor buy. While the report has not been confirmed, several executives explain why selling a club right now is not a good idea: "I can't see anyone putting up a couple hundred million dollars to watch someone else make decisions," said Bill Reik, a minority owner of the Cincinnati Reds. "Sophisticated money doesn't put up $25 million without control. If you're going to put up $200 million, you're going to want control, unless they can get an option or right of first refusal." Tim Sullivan suggests making an IPO for the Padres.
As for the Cubs, the price of the team has dropped in recent weeks because the "cost of capitol went up, [so] the cost of assets came down." While Mark Cuban does not believe it will effect the Cubs' spending this offseason, he does not think the deal will happen by the end of the calender year. Sam Zell called it a lengthy process back in April, way before the economic turmoil set in. If the Cubs are forced to restructure a deal for the team and bidders re-adjust their offers, we could be looking at a new owner by 2010.
This story was approved by MLB Rumors.