Share All sharing options for: Dodgers To Trade Jones? 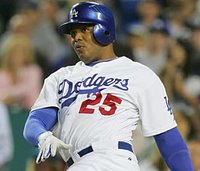 In a recent interview with the Los Angeles Times, Andruw Jones said that if he is not starting, he wants to be traded: "I'm an everyday guy or I need to move out." Jones struggled mightily for the Dodgers in nearly a half of a season, hitting .158 with 3 HR in 75 games. He hit just .222 last season, and is starting to get hit with major injuries. If the Dodgers were to trade Jones, they would have to take on nearly his entire salary. Jones is set to make 15 million dollars next year, and he could be traded with prospects for a similar salary player. They could try and acquire Magglio Ordonez if they want another outfielder. He is making 18 million dollars and has two club options remaining. If the Dodgers are able to resign Manny Ramirez, they could pursue Placido Polanco, who could take over at second base. Either deal would help the Dodgers.
The Dodgers, like any team, like depth off the bench. Joe Torre would find a way to rotate five possible starters into playing if necessary. It is possible they will trade Juan Pierre to Reds for a pitcher, while possibly trading Matt Kemp for Robinson Cano. Ideas have been discussed, but Ned Colletti might be hesitant to make a move knowing he is walking on a tight rope.
This story was approved by MLB Rumors.