Indians and Roberts A Perfect Match

Share All sharing options for: Indians and Roberts A Perfect Match 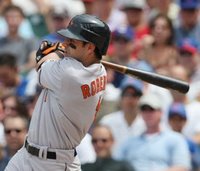 Last offseason, the Indians were the mystery team in on Brian Roberts. The Orioles backed out of multiple deals demanding more for Roberts, ultimately failing to get anything done. This offseason is a different story. Rather than pay Roberts 11-15 million dollars annually to stick around after 2009, they trade him for four or five prospects in hopes of having a competitive team in a couple years. Roberts will not make the Orioles any better next season. They need a power hitter to shape the lineup, a solid number one pitcher to work around, and a stronger bullpen. It looks like Nick Markakis is the guy to build around, considering he hit .306 with 20 HR in 157 games.
If the Orioles are able to acquire three solid pitchers, a combination of Jeremy Sowers, Zach Jackson, David Huff, Scott Lewis, Adam Miller, as well as position players like Ben Francisco, Wes Hodges, or maybe even Josh Barfield. Three pitchers, Josh Barfield, and Wes Hodges would certainly entice the Orioles, who could use the pitching and infield help.
The Cubs, White Sox, and Rockies are also known to be interested.
This story was approved by MLB Rumors.