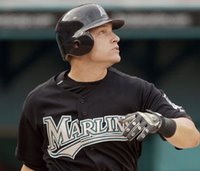 According to Barry Jackson of the Miami Herald, the Marlins and Royals were a player away from trading Mike Jacobs for a package of prospects. However, it is believed the Marlins and Royals are working out a new deal, and it could be announced sometime within the next two weeks. The Marlins reportedly plan to increase their payroll to 30-35 million dollars; however, some industry sources believe it might be a ploy to make some of their players up for arbitration more desirable. Dan Uggla is being pursued by several teams but the Marlins asking price is reportedly too high. If the Marlins can trade Hermida, Jacobs, Olsen, and Gregg, they should still be in good shape for a legitimate run at the postseason.
This story was approved by MLB Rumors.