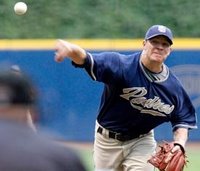 Just a day after the Padres said they would entertain offers for Jake Peavy, several scenarios have come out about where he could wind up. The Angels are one team that is possible, mostly because they have the prospects and it makes sense geographically. The Angels could offer Sean O'Sullivan, Brandon Wood, and Chone Figgins, along with another top prospect or two and would still be in decent shape for 2009. However, the Angels might lose several top position players this year, so it wouldn't make sense to throw away their future on one pitcher.
Peavy's agent, Barry Axelrod, said Atlanta, Chicago, Los Angeles, Houston, and St. Louis as cities Peavy would consider. With that said, the Braves are very possible spot for Peavy to land. If you don't recall from 2006, the Braves were very close to acquiring Peavy in a trade for Jarrod Saltalamacchia and a couple other top prospects. The Braves are looking to sign a pitcher this offseason and if they fail to sign one of them, preferably Derek Lowe, they might pursue Peavy.
As for the other cities, it would be hard to see the Cubs, Dodgers, Astros, or Cardinals unload five of their best prospects for one guy, even if he is locked up through 2012. The Astros do not really have any legitimate prospects while the Cardinals do, but several are nearing the major leagues and they may not want to take several steps back to acquire one pitcher. As for the Cubs, they have several solid prospects, but Jim Hendry never really makes trades unless it overwhelmingly benefits him.
I see a desperate team, who misses out on the free agents, attempt to make a move on Peavy. Other than that, he will likely stay a Padre.
This story was approved by MLB Rumors.