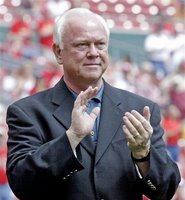 According to the Columbus Dispatch, the Reds may attempt to pluck a couple of the arbitration eligibles players away from the Marlins. The Marlins have expressed a desire to stay at the same payroll and will have to trade several players to keep it there. Among those names, Josh Willingham and Jeremy Hermida, two players nearing their prime that would really help the Reds. GM Walt Jocketty has always gone after the big deal. He did it with Scott Rolen, Jim Edmonds, Mark McGuire, and Mark Mulder, but also made small moves that turned out to be more significant that the big names. Players like Edgar Renteria, Jason Marquis, and Adam Wainwright all have come over through trades to help the Cardinals achieve their goals.
There are several players around the league that are doing well, but do not have a spot on their team: Shin Soo-Choo, Mike Fontenot, Ryan Spilborghs, to name a few. Going after guys like this along with arbitration eligibles should make the Reds, already stocked with a pair of power hitters and decent pitching, to the playoffs.
This story was approved by MLB Rumors.