Share All sharing options for: Lowe Looking For Boston Reunion? 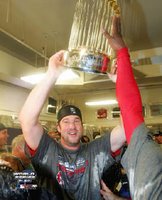 According to the Boston Globe, Dodgers pitcher Derek Lowe would like to go back East and play for the Red Sox. Lowe was 14-11 with a 3.24 ERA in 34 games this season, but is thirty-five and teams probably do not want to give him the four year deal he is reportedly seeking. The best Lowe can get is a three year deal worth about 9-12 million dollars annually. One thing that might worry the Red Sox is that before Lowe went to the Dodgers, his ERA was well over five, so a move to the AL now that he is past his prime might cut his career short if he can not over power AL lineups.
However, Lowe has had a lot of success in the playoffs and brining in a veteran like Lowe would allow the Red Sox to trade one of their young pitchers for a corner infielder or a catcher. Imagine adding Garrett Atkins to that lineup and giving up Clay Buchholz and two other prospects, or acquiring Jarrod Saltalamacchia or possibly Russell Martin.
The Red Sox and Yankees are in similar spots with their rotations and could look to make a big trade involving some of their young guns, similar to what happened last year with Santana. Anyone else thinking Jake Peavy?
This story was approved by MLB Rumors.