Share All sharing options for: Melvin: Brewers Will Pursue Sabathia 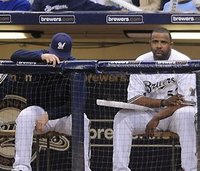 Just a day after the Brewers extended GM Doug Melvin, he has expanded his managerial search and said he will try to keep ace CC Sabathia: "At least we have a chance...whereas before, we wouldn't have any chance with a pitcher of CC's caliber. I do feel we will make him an offer, and at that point, it will be in his court." According to Buster Olney citing industry sources, is that Sabathia will serious weigh offers from his home state of California, as well as the monster offer the Yankees are expected to offer.
Sabathia was 17-10 with a 2.70 ERA in 35 games, but went 11-2 with a 1.65 ERA with the Brewers. While it would make sense after looking at him numbers to stay in the National League, he is the kind of person that wants to play where he and his family will be happy, believing that the team and his ability will give him success, not the opposing teams weaker lineups and his unique approach on the mound.
The Phillies, Red Sox, Blue Jays, Astros, Braves, and Mets are among several other teams pursuing the lefty.
This story was approved by MLB Rumors.